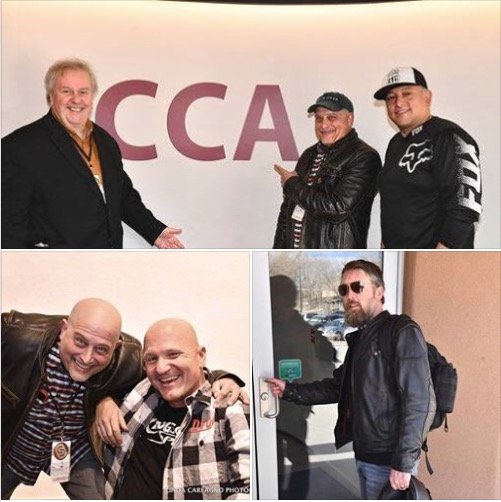 Mid-afternoon and your reporter hot-footed it over to the CCA for main documentary feature ‘Caffeine and Gasoline: Evolution of the American Rocker’ (Steven Maes, Writer, Producer, Director). Already a two-time award-winning documentary (Rome and New Mexico) this superb piece of documentary filmmaking had won the ‘Best New Mexico Film Award’ the previous night. Word of mouth for this film meant the cinema was more than full with the filmmakers giving up their seats so that others could enjoy the film.

‘Caffeine and Gasoline,’ is the story of the evolution of the American Rocker and café racer vintage motorcycle phenomenon that has run from the fifties in England across subsequent decades to the present day. This New Mexico film features footage shot across the USA and in England, Hong Kong and Mexico. A documentary about a sub-culture and culture featuring historical context and images, fascinating interviews with characters and stories you will remember, and of course some of the best motorcycle footage you will ever see – but this was so much more than a motorcycle film. With themes covering individualism and community, brotherhood and sisterhood (the section of female riders was excellent) a story of veterans and the cathartic nature of the open road, and the theme of riders and bike builders being part of a ‘family’ this was a very human and contemporary piece of documentary filmmaking. Beautifully shot by Megan Noce and Kayleigh Maes, produced by Rosario Provenza and Thomas Donnelly and excellently written, produced and directed by Steven Maes, whose passion project this was, Caffeine and Gasoline: Evolution of the American Rocker ‘rocked’ the audience present as evidenced by the lively Q&A after the screening. Members of the audience were visibly moved and their comments suggested that the film should be available to see more widely. ‘Caffeine and Gasoline: Evolution of the American Rocker’ is a stunning, highly watchable work of the highest cinematic standard with an original soundtrack that cries out to be heard over and over again – go see this film when it goes on general release!