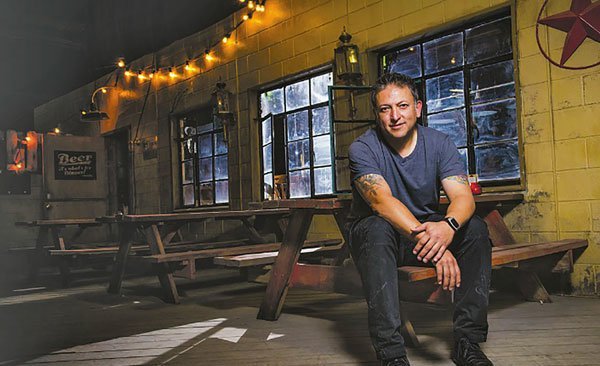 You might have seen the “Los Pollos Hermanos” logo around. Not just in Breaking Bad, but on shirts, beer glasses and novelties abounding. Albuquerque’s Steven Maes, graphic designer and art director, is the one who envisioned it, way back when. Along with Production Designer Robb Wilson King, Maes designed the show’s early-season aesthetics, including Saul’s office, Schraderbrau and the A1A Car Wash.

In his humble beginnings, Maes was set on rock-stardom, even opening for the likes of A Flock of Seagulls and Modern English. But several twists of fate led him to the film industry, where he’s been at it for 12 years, meticulously crafting the graphics and set design we see onscreen. He’s a world-builder, essentially, and one who vehemently disagrees with anyone who says New Mexico’s film industry only benefits Hollywood. “In the art department alone we spend roughly $80,000 per episode, injected directly into the local economy,” Maes noted.

With a sister and two brothers-in-law in film (one of whom is Todd Byington, also featured in this issue), film is Maes’ blood. Still, he makes time to be with his family, record music, build cafe racers and, “when a show is particularly rough,” yield to the serenity of fly-fishing.